Another 'Letter from the Past' this one a plea against blind conformity, from Geoffrey Chaucer, poet, diplomat, and astronomer father, who wrote A Treatise on the Astrolabe for his 10-year-old son Lewis.

Author’s Introduction: Imagine if Homer, Virgil, Dante, Chaucer, and the other great poets of ancient Greece, Rome, and the Middle Ages had been given the gift, not only to peer into the twenty-first century, but to correspond with us who live in that most confusing and rudderless of centuries. Had it been in their power to do both of those things, what might they say to us? How would they advise us to live our lives? What wisdom from their experience and from their timeless poems might they choose to pass down to us? 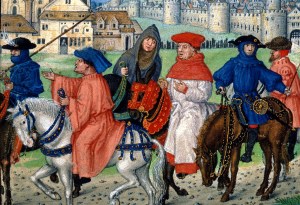 Vive la différence. That is what the French say, and, even if they are wrong about most things, they are right about that!

How dull this world would be if every stone and stream, every tree and flower, every bird and dog, every man and woman were the same. The earth we inhabit is a vast and volatile grab bag that can never be reduced to a single formula. Oh, yes, each year spring follows winter as surely as autumn follows summer, but within that seasonal frame of hot and cold, wet and dry, feast and fast, we live irregular, unpredictable lives.

And I wouldn’t have it any other way. After all, it isn’t only the French who love variety. God himself has filled his world full with an unlimited array of creatures, so that no two leaves, no two wings, no two faces are exactly alike. Even the snowflakes, whose delicate beauty lasts but a moment, are distinct one from the other.

I have studied your age, and I am, frankly, puzzled. On the one hand, you champion individualism and demand complete freedom of self-expression. On the other, you are timid conformists who want to be just like everyone else. Even when you rebel, you tend to look and talk and act just like all the other rebels.

If you would learn to love variety, as most of you did when you were children, then come and walk with my pilgrims on the long road to Canterbury. If you do, you will find yourselves in the company of every human type: from humble pastors to hypocritical clergymen, lovers of learning to lovers of gold, knights who live by a code to survivors who make up their code as they go along.

Please don’t think I am encouraging you to imitate or even to approve of those who commit sinful actions. But I do encourage you to get to know them. Let my pilgrims tell their tales in their own words and in their own manner. Don’t try to force them into the same mould. If you do, you’ll fail.

Take them as you take the Bible, with all the troubling passages well intact. You can no more remove the sex, violence, treachery, and despair from the pages of the Old Testament than you can remove the sinners, charlatans, and scalawags from my merry band of pilgrims.

The hour will come soon enough when we will be fixed in our virtue or vice for eternity. But for now, as long as we live in the flow of time, our choices and possibilities remain open. Do not blind yourselves, then, to the rich variety that lies about you. Be prudent, but do not forsake your youthful curiosity; be careful, but do not shield yourself from all potential dangers; be discerning, but do not be too quick to judge.

And please don’t fall into the trap of Aristotle and Horace. I respect what they wrote, but they were far too hung up on decorum. Don’t be afraid to mix tragedy with comedy, high with low, serious reflection with bawdy humor. Don’t let a prudish fear of contagion keep you away from witnessing, and understanding, the fullness of our humanity in all its glory and all its depravity.

But can you do this? I have discovered through my study of your age that you are all direct descendants of my craftsmen: of my Haberdasher, Carpenter, Weaver, Dyer, and Tapestry-maker. Like them, you are too quick to insulate yourselves from anything that lies outside of your day-to-day experience.

Ah, my foolish craftsmen. They go to all the trouble of leaving their businesses behind so that they may take a pilgrimage, and then they spoil everything by bringing their cook along. Rather than open themselves up to the vagaries of the road, they create for themselves a protective space and then carry that space with them across the length and breadth of England.

Though that may seem absurd, many of you who live in the twenty-first century share their almost pathological desire to protect themselves from the strange, the foreign, and the unknown. That is no way to live a human life!

As you embrace variety, you must also embrace risk. There are no guarantees in life, and those who insist on having them end up bitter and disappointed. For better or for worse, God placed us in a dangerous world that calls for perpetual vigilance but also for perpetual risk. A pilgrimage is not a vacation, but an adventure of discovery that pushes us out of our door and into the wide world.

But you need not, nor should you, take that journey alone. True pilgrimage is a communal undertaking: a temporary society on the move. Rather than turn inward in search of enlightenment, turn outward toward your companions and learn to see the world through their eyes. Learn to get along with people whose passions, beliefs, and strategies for survival are radically different from your own.

The educators of your day seem obsessed with the word diversity. I, for one, prefer the word variety. There is something deadly serious about diversity, something that prevents, rather than fosters, real camaraderie. Variety, in contrast, is fun. In learning to laugh at our differences, we learn, simultaneously, to respect them and rise above them.

The first of my pilgrims to share his tale with the group was the Knight. When he finished, our host hoped to follow the Knight’s Tale with one by the Monk. But the Miller wouldn’t allow it. That ignorant buffoon, inspired by alcohol, shoved himself in and broke the decorum the host had hoped to establish.

The Miller, you see, insisted on being heard, on inserting his point of view between that of the courtly knight and the godly monk. And so I let him be heard. I couldn’t shut him up, and I had no desire to do so.

Now, dear reader of the future, if you don’t want to hear his tale, you can just turn a few pages and find another tale by a pilgrim possessed of more grace and decorum. But if you do that, you’ll miss out on a whole dimension of life that you have been blind to.

Take the risk, embrace the variety, and you just may learn something that will help you grow into a fuller, richer person.

The featured image is of Pilgrims from Canterbury, by an unknown artist, courtesy of Wikimedia Commons.