Fr Zed shares the obituary of Bishop Morlino from the US District of the SSPX with his comments.


This was gracious.
From the US site of the SSPX.

Bp. Robert Morlino, Brave Defender of the Traditional Mass, Passes Away
Bishop Morlino of the Madison, WI diocese, passed away Saturday evening last, after a sudden “cardiac event,” shocking traditionally-minded faithful who had flocked to his diocese in recent years.
If, as Archbishop Lefebvre so staunchly maintained, the lifeblood of the Catholic Church is its priests, then Bishop Morlino was a shepherd of the Church who can be admired by all Catholics. When he donned the mitre as Madison’s bishop, enrollment at the local seminary stood at 5 seminarians. Not 5 seminarians in the first-year class – 5 seminarians in the entire seminary. Today, more than three dozen are receiving priestly formation, with 25 having been ordained during His Excellency’s fifteen years overseeing it – all during the worst abuse scandal to have shaken Holy Mother Church in its history and while vocations are plummeting in Diocesan seminaries.  [They didn’t get the right numbers.  Better… there were 6 in formation when Morlino arrived.  The height was 3 dozen.  Now there are two dozen.  He ordained 40 – not 25 – in his years in Madison.  However, that doesn’t change the main point, which they go right: big impact on the number of seminarians and ordinations.]
As the common prayer goes, we do not ask the Lord to grant us priests, or many priests. We beg for “many holy priests”.  [The young priests and seminarians I know in Madison are great!] It goes without saying that quality is preferable in every measure over quantity for those anointed. The bishop molded men into some of the most traditional priests emerging from any diocesan seminary throughout the world. While the seminarians were taught the Novus Ordo Mass – albeit with strong recommendations to celebrate ad orientem – they were also trained in the Traditional Latin Mass, more than a rarity in today’s Church-wide seminary curricula. [Without imposing on them, Bp. Morlino told the guys that he would like for them to learn the TLM before ordination.   Every one of them knew that he would support them.  He said the TLM for them himself.  Last August, during the annual gathering of seminarians with the bishop, they organized a Solemn Mass, with a 1 yr ordained as celebrant, brand new deacons assisting, and a newly ordained priest as MC.  They did it.]
Bishop Morlino himself celebrated the Mass in the “extraordinary rite” and publicly manifested his preference by regularly celebrating a pontifical High Mass, surrounded and served by his local priests and seminarians.
While it is true that he did not mandate the celebration of the Latin Mass in his diocese, he encouraged it, possibly hoping that its fruits would bear in time – an approach far less strong than many traditional Catholics beg for.  [I think there are some 8 places in the diocese where the TLM is regularly found.]
Yes, his plan was certainly passive. [I’m not sure that is the right word.  He lead by example and didn’t impose.  In Madison, imposing would have meant all out war against him and everything he was doing.] But he was not passive in defending truth – including the Society of St. Pius X.
In 2002, His Excellency appeared on EWTN Television, after a letter, purportedly from his desk, attacked the SSPX. He courageously “gathered the feathers in the wind,” offering a public apology for the letter, taking ownership of its message, while explaining the words were not his, and in fact, he had struck them from the first draft. [That is exactly true.  I can attest to that.]
The SSPX does not often publish these sorts of obituaries, but an exception has been made in this case. The hierarchical Church needs more bishops like Bishop Morlino, ready to draw a line against the storm of confusion and innovation still plaguing the Church, ready to refute falsehoods perpetuated in his name, and acting as much as a leader as one can hope for in the Church. It is through these sorts of men that incremental progress within the Church can be achieved, and the restoration of the Catholic Church can be realized.
May God rest his soul in peace!

Also, this morning I received a note from the great SSPX priest who served for sometime in the area of Madison, within the Diocese. He sent photos of the Requiem Mass he celebrated for the Bishop. 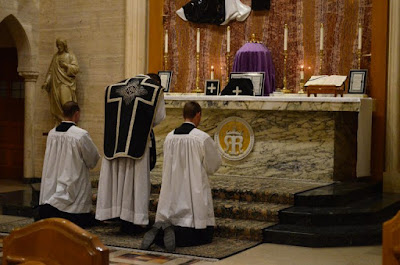 Another example of how Bp. Morlino brought out the best in people.
That was a very gracious gesture from the SSPX and I am impressed and grateful.
Posted by Jovan-Marya Weismiller, T.O.Carm. at 20:13