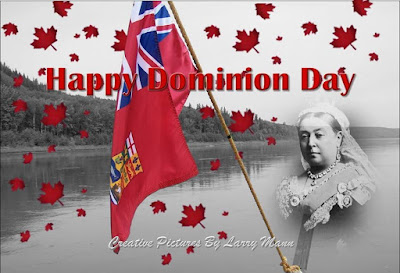 Well, it's after midnight in Manitoba, so it's Dominion Day in Canada! For the youngsters among you who don't remember the real name, Happy Canada Day! Here's some music to celebrate the 154th birthday of the True North, Strong and (Once) Free!
First the Royal Anthem, in honour of Her Majesty Elizabeth II, Queen of Canada.


O, Canada, in English, with the original lyrics, 'In all Thy sons command', not the bastardised ones Daddy's Little Boy wants people to sing.
O, Canada in French, with lyrics in French and English. I'm surprised Justin 'Bieber' Trudeau hasn't tried to Islamicise the lyrics to this version.

And, The Maple Leaf Forever, the 'unofficial national anthem' for decades before O, Canada was adopted.

Not music, but the 'I Am Canadian' rant from the Molson's beer commercial. A classic!

And no Dominion/Canada Day would be complete without a mention of THE Canadian, Stompin' Tom Connors. Here is the last letter he wrote to his fans, just before his death.
Charles Thomas "Stompin' Tom" Connors, OC (February 9, 1936 – March 6, 2013)
Hello friends, I want all my fans, past, present, or future, to know that without you, there would have not been any Stompin' Tom.

Take Me Back to Old Alberta
I wasn't born in Alberta, but as I say, I'm a Kansan by birth, and an Albertan by choice.

So Long, Stompin' Tom
A song written by Mike Plume, a fan of Stompin' Tom's, on hearing of his death.