MM looks at the day Benedict XVI resigned. It's hard to believe that it has been nine long, horrifying years of Francis!

It is now official, the see is vacant, the throne is empty, there is no longer a Pope. At least until the conclave holds their next election anyway (sorry if that seemed over-dramatic). Yesterday, Pope Benedict XVI left the Vatican as, well, not exactly a common cleric but as someone who is no longer the Roman Pontiff. He will still wear a white cassock, will still be addressed as “Your Holiness” but he has turned in his red shoes, will be protected by ordinary Vatican police rather than the Swiss Guard and his Fisherman’s ring has been smashed. A sad day but, from my point of view, somewhat anticlimactic but that was probably unavoidable. Nothing could really be done that would fittingly mark an occasion so historic that it has literally never happened before. One must go back six centuries for a papal “resignation” and even then, on the rare occasions it has happened, it was never really like this. As most readers know, I have been rather upset by this but, in case there is any confusion, I want to make it clear that I would not be as upset by it if not for the fact that I have always held Benedict XVI in the highest regard. He always seemed a very trustworthy hand on the helm. Yes, I know someone will say that God is always in charge and all that, so there is no need to worry, but it seems to me there is a Pope for a reason and any look at history will show that who that man is does matter. 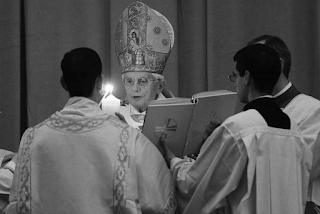 For my part, a great deal of the anxiety over his resignation stems from the fact that Benedict XVI has, to my mind, done an excellent job in his years on the throne. Very early on I considered him one of the best popes of modern times, realizing that for some of the same reasons I thought so, he would never be accorded that status by the majority. I would think (though I cannot say for certain) his writings may have been his greatest achievement from a Christian perspective though I do not know personally anyone who has actually read them all. Certainly he will stand out for his establishment of the old Latin mass as the secondary “extraordinary form” of the mass and his efforts to make it more widely available. Sadly, the bishops did not seem to be very cooperative in this endeavor. Still, his efforts raised the status of the Latin mass considerably and probably changed the mainstream perspective on the Latin mass to something that should be accepted and honored rather than shrinking away from it as the territory of the disobedient and the schismatic. That is a considerable accomplishment on its own.

The outreach to disaffected Anglicans is another hallmark of his reign, though one that is not without some controversy. Some Anglicans were, of course, upset by this and saw it as an effort to encourage defections from their own dwindling ranks. There was a time when I might have been more broad-minded about such an issue, taking into account that each side believes they represent the true Christian message but, frankly, I can no longer do so. The state of the Anglican communion is entirely of their own making and given the extent to which so many have flagrantly turned their back on traditional Christianity, to the point that even the Bible itself can be repudiated, leaves me with little room for even theoretical sympathy with their point of view. As someone who favors the oldest and most traditional sort of Christianity, I was hopeful that, in welcoming disgruntled Anglicans (most of them very ‘high church’ types) into the Church of Rome it might work together with other actions by the Pontiff to ease Catholicism back into a more traditional direction than it has been on since the Second Vatican Council. 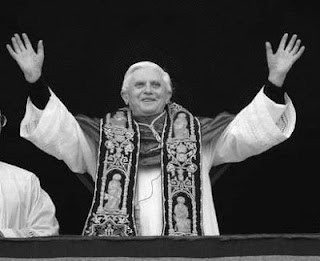 On that subject, I considered it a positive thing that Benedict XVI spoke of the need to ‘reform the reform’ (or words to that effect) in reference to Vatican II. Others can speak with greater authority on the wide array of subjects inside the Catholic Church related to the Council but to me there seems to be no room for doubt that things have grown progressively worse for the Catholic Church since that time. The ‘how’ and the ‘why’ can, and have been, debated at length but anyone can look at the basic statistics and see that, for whatever reason, Church attendance, numbers of priests and religious have all fallen off dramatically since the Council and, while I see nothing wrong with the content of the documents produced, again I think anyone can see that they were not implemented correctly. Could anyone honestly say that Pope John XXIII or Pope Paul VI would have approved of “clown masses”? I think not. Whether such a ‘reform of the reform’ will go forward under the next Pontiff remains to be seen but I would hope so.

Many have said that the changes of Vatican II were, in large part, about reaching out to Protestants. If so, it doesn’t seem to have worked very well in that regard and another area I recall Benedict XVI attracting considerable controversy was in his statement that the Protestant denominations are not true churches but that the “Church” is to refer only to the Catholic and Orthodox communities (though sadly these two had a tiff and have spent quite a few centuries giving each other the silent treatment). This seems to have outraged many Protestants though I cannot imagine why. I can understand anyone being upset that someone would say their church is not a “real” church in general but I do not really understand why a Protestant would be upset at the Pope saying that. It would be like a Christian getting upset at the Ayatollah for saying that Christianity is a false religion. He’s the Ayatollah -I would expect him to think that and say that. In the same way, if a Protestant, let us say a Lutheran, were to hear the Pope say, while sitting in the pew on Sunday, that he or she was in the “real” Church, I would think the Lutheran in question would probably run outside to check the sign in the front yard to make sure they were not in the wrong place. Are we all so sensitive these days or do so many people really not understand the fundamental difference between the Catholic and Orthodox on one side and the Protestant denominations on the other? 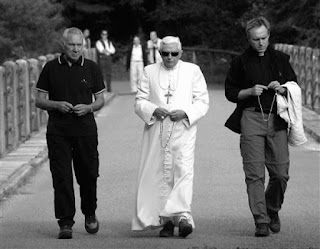 There was also the “controversy” over Benedict XVI making mention of religious conversions through violence being a bad thing (who would have though it would be) but I hesitate to even mention that as it seems so much a case of much ado about nothing. However, it was a far cry from that silliness once displayed at Assisi. Taken altogether, as well as with the efforts to reconcile the Society of St Pius X to the rest of the Catholic Church the reign of Benedict XVI can be seen as one favoring tradition, old-style Catholicism (winking at the odd coat of arms and the resignation itself) as well as one encouraging a defense of traditional values and an open and honest stand for basic Christian principles. All in all, I think he had a good run and I only wish it could have gone on longer. Still, we wish His Holiness a happy retirement and will wait and see who the Sacred College chooses to follow after him.
Posted by Jovan-Marya Weismiller, T.O.Carm. at 00:30